The Impact of Social Media on Children 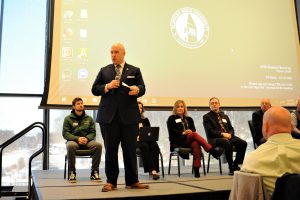 Agent Phil Little and members of the Focus Group

SLIPPERY ROCK — Thanks to smartphone apps like Snapchat, social media users — especially children and teenagers — are often under the impression that once a photo is seen on Snapchat, that photo is gone forever. But frequent cyberbullying and online human trafficking capabilities say otherwise.

According to Phil Little, of the state Attorney General Josh Shapiro’s office, human trafficking and harassment often stem from social media. And that’s especially the case with youth.

HH Education Events, founded by Herbert Hunt, a former principal in the Neshannock Area School District, discuss issues surrounding education at free seminars. Hunt started HH Education Events five years ago after he retired. He said he wanted to organize free events for educators across western Pennsylvania that school districts might not have the time or resources to arrange.

Educators from Erie to Greensburg were present Monday morning, with close to 125 in attendance.

Little started off the morning by addressing the most popular social media platforms students use today, specifically Snapchat and Instagram.

“No app is worse than the other,” Little said. “It’s the behaviors we exhibit that youth consider normative that is the problem.”

Some of these normative behaviors include receiving validation from likes and comments on social media posts and seeing how many followers students can acquire.

Little also mentioned how predators frequently use metadata from photos and videos sent via text or in-app, social media messaging.

In February 2012, William Ainsworth, a then-53-year-old from Mars, created phony Instagram accounts to contact teenage girls in Allegheny, Beaver and Butler counties, seeking sexually graphic messages and photos from several girls. He was charged with involuntary deviate sexual intercourse and multiple counts of charges that included attempted unlawful contact with a minor, possession of child pornography and criminal use of a computer.

Metadata is basically data inside data that can be easily extracted,” Little said. “It’s info embedded in a photo or video.”

That information can be retrieved easily, giving a child predator the exact coordinates of where that photo was taken and at what time. Students may be unintentionally telling a stranger exactly where they live by simply sending a photo of their dog, Little said.

“This happens,” Little said. “This is incredibly real.”

To combat the social media arms race, where students find their identity in their follower and like counts, digital security is essential.

“Limiting who can see your posts goes against this social media arms race,” he said.

Little charged parents to monitor their child’s friends and followers and to constantly communicate with their children about social media.

“You can talk about anything with anyone if you shape the conversation correctly,” Little said. “Communication is key.”

Editor’s note: This article was authorized to be used on this site by the Ellwood City Ledger. Reporter Dani Fitzgerald took the photo.

This entry was posted in General News & Information. Bookmark the permalink.